In case you haven't noticed, I don't post as much when I'm in the states. Just a bit more of a mellow life here.

The airport house is geek central these days. It's me, Adam and Zach... all hardcore geeks. Well, we got a movie projector and hooked up the Wii and a computer to it. We have no TV. We have movies on demand over the internet (with netflix). Any TV stuff we download. The Wii is the kicker though. I've never played it on a TV... and now I never can. Once you play bowling in life size, a tv sceen just ain't gonna cut it. Lately we've been playing lots of golf and guitar hero. Hahahahaha... it's insane.

Me and Zach got our car running too. He did the majority of the crap over the winter and I fixed the alternator and belts a few days ago. It's nice to be mobile again. Of course the furthest I really go is a couple miles to the grocery store, but hey... sometimes you NEED some ice cream right?

Got the "phantom" ultralight all nice and cleaned up too (yeah, it's called a phantom). It's nice to be able to just go fly whenever I like... hell, I live at an airport right?!

Well that's all that's going on around here for the moment.
See ya
Posted by Jim at 7:11 PM 2 comments:

Couple more for ya... 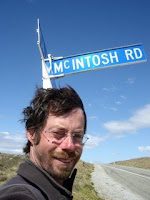 Only a geek would shoot this ;) 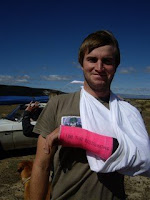 This is one of my friends from Dunedin James. He flies hang gliders too. His cast says "I did this rollerskating", which is true. 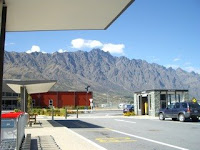 This is the mountain I get to fly in Queenstown as seen from the airport. Yes, we are that close to big jets. 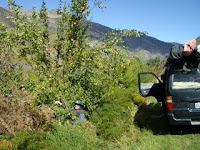 Sometimes you need to stop and... pick the apples?
Mmmmmm
Posted by Jim at 12:34 PM 4 comments:

Ok, here's some NZ ones.
One day we went up to fly the Remarkables Mountain (yup, that's it's name), but it was shall we say, a tad too strong. Peak winds were over 100kph (just over 60mph).

That last one's Gerardo "jacket flying". Open your jacket and jump and it actually pushes you back a bit. 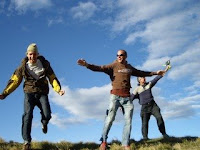 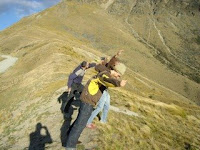 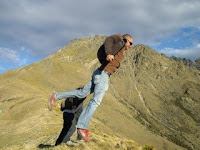 I'm over my jetlag and the weather sucks, so I have no excuse to not be putting up some pictures.

Kinda funny what comes to roost when you're away for a while....
I left my helmet on my motorcycle tank and forgot to close the visor. A bird found it perfectly suited to being a nest. Hahaha 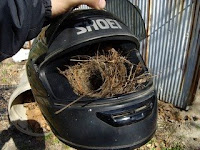 A mouse found his way into Lance's computer.
Woops. 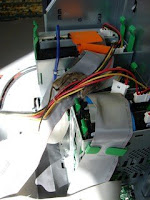