Not much new.
Bit of flying here and there... just now getting warm again (finally back in the 70s). Couple flights a day. Would be nice to have a few more. I'm sure it'll go from not enough to too much in a flash though ;)

Everything else is done (businessy stuff), so now it's on to just flying and enjoying the summer.

Hung around late with the guys at the hill yesterday. Gerard was teaching a few freinds hang gliding. Always fun watching people take their early flights.

Me and the guys from work have found an appartment in town.
I'm currently living at my old place in Frankton which is a few minutes down the road from Queenstown. I don't mind the drive. It's just 5 or 10 minutes. Even with gas being roughly three times as expensive here (ya'll have nothing to complain about). Nope, the reason I'm moving (the guys want to be closer to the bars) is to be closer to the flying site.
I'm spoiled.

See, there's a gondola in town that takes you up to the scenic overlook resteraunt. Well, we're allowed to fly from a spot just above that and land right in town. It's good fun. BUT, there's no weather station (there is at Coronet and the Remarkables is next to the Airport, so you can get airport weather). With the gondola, you have to roll the dice. Driving into town for a sure thing is one thing. Driving into town for a maybe is an other. So yes, I'm moving into town for the flying... I'm guessing that doesn't shock anyone.

Other developments in the land of strange...
Weather went to piss for a bit there. Still got a bit of flying in, but had to cancell a few days. Should be coming right.
Dropped in to see Ian (monster truck dude), but he was off putting a motor in his boat. I'll swing by again later.
Got my work permit yesterday. I'm officially able to get paid now :)
Other than that, It's been real cruizy around here. Wicked flying when we can fly and just pissing around when we can't. Too cold to do much on the bad days (60s bad, 70s good). Did brave it for that trip up the hill out back though.
John and Lisa (extreme air, my old company) are popping in for a visit next week. Should be loads of fun.

Good fun.
Shaping up to be a good summer.
Jim
Posted by Jim at 10:46 AM No comments: 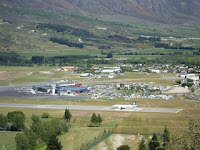 Too windy to fly today, so me an Ken (flatmate) went for a hike. There's a big hill out back (back home they'd call it a mountain), so we just hiked up it. That first pic's looking back down towards the airport. The next is looking back the other way towards Coronet peak. 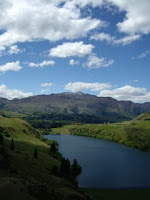 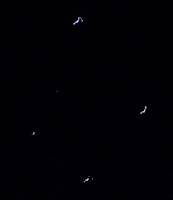 If'n ya travel half way around the world, ya do kinda need to check out the Southern Cross.

There's a good bit less air pollution and light pollution going on down here, so the sky is filled with a bit more stuff ;)
There are a few "false crosses" near the Southern Cross. They're bigger and boxier, but the easiest way to tell the Southern Cross is it has a little fifth star. It's a bit dim in the picture so I've circled it.
It's easiest to have a friend point it out the first time, then it's clear as day.
Posted by Jim at 12:15 PM No comments:

Something dawned on me today. One of the big reasons I like this place is this very odd feeling I get when I'm here... I fly enough.
It's crazy. I actually have to think of other things to do. Fortunately, there's plenty to do. I'm glad that my friends are starting to show up in town now too. That always takes a bit of time to adjust. Back home we're a tight crew. Over here, it's different every year... takes a bit to settle in.
Posted by Jim at 10:59 PM No comments:

Today's Sunday for me. I currently take Monday and Tuesday off.
(it's Tuesday here)

I promised some people I'd talk about the "downsides" of NZ... so I'll scratch my head and come up with something I guess. I guess what got me on about this is running into a mate of mine Tom last night. Tom's a Kiwi that just got back from a big tour of the US. He did something like a four moth long trek around the country and into parts of Canada. I'm also working with a guy from Sweden this year, who's quite the cynic.

Here goes.
#1 biggest difference is the internet. Tom put it well... "In the States, you can just pull over to the side of the road and pop on the net". It shocked him at how open wireless networks were because "no one's concerned about someone using up their quotas". See, NZ's still in the buildout phase of things. Internet connections aren't just regulated by speed, they have transfer caps. So once you download X amount of data, you get cut back to slower than modem speeds.

The public access at the Library was also a bit of a difference. Over here, you pay at the library. It's cheap, but you pay. Granted, there's a host of free internet wifi spots in town, but this is Queenstown. Not sure how the rest of the country is.

The wireless spectrum over here isn't ruled by the telco's either. So you have companies like HQwifi offering internet access without phone contracts... much like Google's getting set to do in the US.

#2 Friendly people
Tom's big observation was that there's a lot of black and white mentality in the States. You either agree, or you're wrong. He liked that "immigrants" in the US were much friendlier than the norm and far more open minded. And that arguing with someone from the south about "America's gun society" is well... a bad idea.

Over here, some complain about "the fake politeness". Usually when they feel like "telling someone a thing or two". "Venting" is not allowed. Even if you'd like to tell someone to piss off, you have to be nice about it. I kinda like it. Not being allowed to be a jerk has merit in my book. Guess no one's really gotten under my skin yet. It does have the effect of putting a "surface friendly" in places, but you get used to telling the difference.

#3 when it's cold, it's FREEZING!
America's love affair with gas has it's upside. There's no gas heaters over here. You want heat?... light the fire. Live in an apartment (no fireplace), then you've got electric heat.. and electric is expensive... very expensive. This more than anything else is why I leave in the fall.

Brownies
NZ has it's own host of problems, as any place does. Living in Queenstown, I'm pretty much insulated from them... This is a resort town. Everyone's happy, everyone's having fun, etc. Everything's also quite temporary, which is both a blessing and a curse. Every now and again, I venture out into the "real" NZ. Still lots of happy people, but more normal people, with everyday problems.

One things is unmistakable though. No matter where you go, the food is better. Not just better for you (you can get junk if you like), but it tastes better. My first (re)encounter with this was on the flight here between Auckland and Christchurch. The inflight snack was a brownie. Nice big fluffy thing... not the brick of lead or cruchy block of dirt I'd expect. Shrinkwraped up as you might expect, but a real brownie. It tasted home made.

Here's why.
I was first clued into this on the Discovery Chanel a few years ago...
Flip the pack over. Read the ingredients.
SUGAR.
Real, unadulterated sugar. White cane goodness. Not "High fructose corn syrup"... AKA Corn Sugar. The scourge of the American diet.
Corn sugar is plentiful and cheap in the US which is why it's used in nearly everything in the States... and it tastes like ass.
(oh, and it's bad for you too)

Even soda pop over here tastes better.
If you'd like to see what I mean... go find something made with sugar (and no corn syrup) and find the same thing made with "high fructose corn syrup".
The difference is striking.

Wireless-a-go-go
Ye haw!
Got my wireless service started today. I'm not being a total dork just yet and writing from the beach (though that's bound to happen), but it's all good.
Had a touch of creditcard voodo to get past (the online form didn't work), but now I've got wicked good internet... everywhere. Queenstown's lit like a chirstmass tree.

Photos are still a bit of a pain on this little Nokia thingy, but once my eeepc gets here, that'll get a lot easier. Good to be truly mobile again. :)

Ok, finally getting some photos up. 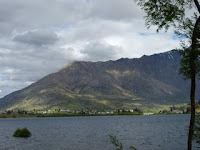 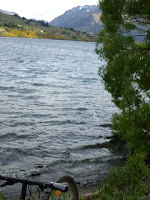 0-100
Went from sitting around picking my nose to flying-all-day in about 5 seconds. The sitting around was due to my not being able to work, not my lack of wanting to work. I like flying all day. Once those ducks were lined up, it was back to Queenstown-Mode.

It is however why I haven't been posting anything. I'll see about getting some pictures going, but nothing at the moment I'm afraid. All in good time.

The (other) good news is that Queenstown's gone and got itself VERY wired (or unwired as the case may be). It might take some doing to get it working, but they have a wireless service that covers the entire city. So for $40nzd/month ($30usd), I'll have dsl speed interent everywhere. If I can get that sorted, I'll be posting from the park by the lake.

Quack quack
Seems like my ducks are in a row.
I'm happy with the way this is for now. Think I'll stick with it for a bit.

In addition to getting my website screwyness sorted, I got my apartment situation straight too. I dropped by my old flat to say hi to Ken (the landlord). We sit down for a cup of tea... and oh yeah... btw he's looking for flatmates. Well perfect.

Tomorrow I'll get my work permit paperwork turned in and hopefully be working by the end of the week.

Back on Blogspot. (notice the jimrooney.blogspot.com up at the top)

I haven't been happy with my server, so I'm chucking this over here. This should be a bit more reliable. I'm not sure how I'll setup the front page of jimrooney.com yet, but it'll always at least have a link to this.