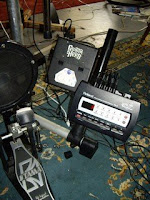 I completed the enclosure today. Stick a fork in it :)
Posted by Jim at 11:06 AM No comments: 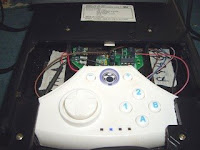 I got the final parts for my drum kit mod yesterday :)

What I've been up to is hacking my Rock Band drum kit to use my electronic drums. It's been an analog hack till today. Now it's digital :)

Big deal right?
Well the difference is in the accuracy. The analog hack was just that, a hack. It sorta worked. I wired the drum sensors directly into the Rock Band circuitry. This only works at best as well as the original kit, which isn't exactly stellar. What's worse is that it was even less accurate than the plastic crap drum kit.

Soooo... I found instructions on the net (of course) on how to make a digital link and use all the precision goodness of the electronic drums "drum brain".

I finished it this morning. Holy crap what a difference!
(it's not a just little better... it's amazing)
Very happy :)
Posted by Jim at 5:50 AM 2 comments: 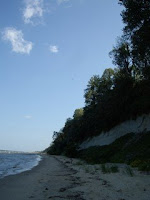 This is Gary's Beach Site
Gary's a local Hang Gliding pilot who's parents live on the bay... and let us fly from their place. As luck would have it, they own a park on the cliffs of the bay. The cliffs are 50-100ft high.

When the wind's right (NE at 15mph), the wind gets deflected up over the cliffs and sets up a standing wave. We can surf that wave :) 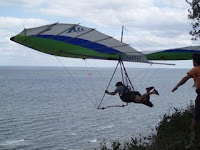 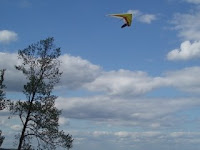 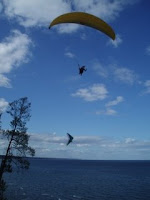 Me and Adam.
As if we aren't lucky enough to even be able to fly this site, Gary's parents are happy to let me fly my paraglider too... out of their front yard! The hang glider takeoff isn't suitable for PG, so they let me takeoff in front of their house. They're even moving a big post to make it easier.

We are insanely lucky.
It's invitation only and we're thrilled to be on the invite list.
Posted by Jim at 5:16 AM No comments:

And with fall comes the wind.
Typical stuff... the hurricanes start bashing the East Coast which pushes us into windy season.

Well. This year... a buddy of mine (Steve) has hooked us up with a cliff launch beach flying site that faces the magical North East :) (Hurricane wind direction is E for us, typically NE). There's nothing all of us love better than beach soaring. Adam and Sunny used to do it constantly when they were teaching down in North Carolina. We just don't have... well didn't have... a beach flying site here. Till now.

Kristen got some pics of us all flying and I'll get them up once I get them.
Looks like an other NE day today :)
(it's a 2 hour drive, so it takes a bit of organizing)

I'll have to get a picture up of Grant.
Grant holds the distinction of being the first student here. He started 10 years ago.

Grant's 60 (70) something? He lives down the road and comes out for lessons when he can. He had some medical issues that got in the way for a while, but that's all cleared up now. One of the hurdles Grant's been facing is that he tires out pretty easily. Now just flying around, this isn't really a problem. But when learning to fly, it can be. The last thing we work on is landings. Well to land you obviously have to take off. Which means you have to tow up... well that's where the real workout is. The tow up is the hardest part physically.

So learning to land has been hard since we just can't get a lot of repetition in. Add to that you need near perfect weather. Fortunately Grant's very patient and persistent. He just wants to fly. Man he wants to fly.

Well this year we've got what's called a "scooter tow". It's a ground based winch that I can use to pull a student into the air... to practice... you guessed it... landings :)

We took our original tandem glider and configured it especially for Grant. Yesterday tweaked it so that I could scooter tow Grant. It already had really big -BIG- wheels and a harness that would fit him. He chuckled when I showed it all to him... it was the glider he did his first tandem flight in! It was even the same harness. He liked the idea. He said he was really keen to scooter tow back when he first saw it... thought "hey now, that'll work".

With scooter towing, you fly alone. Grant's never flown solo... always tandem. You're only 5 feet off the ground on the first one and the thing maxes out at a couple hundred (90% of the time, I pull people under 20 feet up)... but YOU'RE flying.

So we drug it all out and had at it.
I take people for their first flight all the time. They're always happy when we land "wow, that was cool!"... but I gotta tell ya... I don't know that I've seen the kind of happy I saw in Grant's face after his first scooter tow. "Jimmy, I've been looking for that for 10 years".

Well, it's official again, I'm heading back to Queenstown.
I leave San Francisco November 10th.
I'm back in LAX on March 31st.

I have no definite plans beyond that. I always book the "big" flights first as they are the most expensive and you save a lot by booking early. For now, I have some tentative plans to visit some friends in SanFran before I jump the pond. 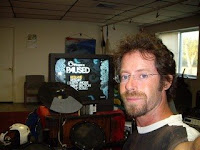 To say I'm obsessed would be a gross understatement.

"Rock Band" is a game that competes with "Guitar Hero".
(If you haven't heard of Guitar Hero, you live under a rock.)
Well, Rock Band adds singing, bass guitar, and my favorite... drums :)

For those of you unfamiliar, I used to have a drum kit. I was never much good, but I took lessons for a while and did a good job of pissing off my neighbors. See in the military, I lived off base with one of the guys I worked with. Well, he just happened to play bass guitar... we had an attic and one day the neighbors below us moved out. So...
Every Friday night, some other guys from work that happened to play guitar would show up and noise would ensue. Eventually the cops would show up too, then it was show over for the night. I think we eventually settled on an 11pm curfew. It was a hell of a lot of fun.

Eventually I left the military and things fizzled. Rounding up people to play with and finding a place to not piss off the neighbors is a bit of a task. Lugging around a drum kit doesn't mesh well with a vagabond lifestyle either. So the drums faded away.

Then along comes Guitar Hero.
Close, but no cigar. It looked pretty fun, but I couldn't care about guitar. The potential was there though and rumor was afoot that a full band version was coming.

It showed up in the form of a game called Rock Band :)

Rock Band was an instant party hit. I mean people flocked over to the house on Friday nights for the sole purpose of rocking out. It's a riot. Even the singing is done well.

What captivated me was the drum "practice mode". It had far more depth than I expected. When I saw how well practice mode worked, I bought a WII the same day for the sole purpose of playing Rock Band.

The next part came very unexpectedly. I'd set my kit up in the "pilot lounge" at the airport so I wouldn't have to go home just to play. There's a local pilot we call "Bunkhouse Bob". He's a super nice guy. He comes down and usually camps for a week at a time. At night, he can be found picking away at his guitar sipping some wine. We've talked from time to time about him bringing out his electric drum kit sometime so we can jam. But that's a bit of a pain and just never happened.

Well, Bob sees the Rock Band kit (and that I'm completely obsessed) and that sparks up the "hey let's jam" bug again. Well, instead of lugging out his drum kit for a weekend, he gives me one of his old sets!

It needs a few key parts, but Ebay fixes that straight away. Ha, I think Bob was a bit surprised that I ordered the parts (kinda pricey ones) as soon as he told me I could have the kit. Hell yeah buddy!

Bob's not been back just yet, but I very much look forward to jamming with him.

See, the Rock Band kit is a plastic toy game drum kit, which is fine for what it's supposed to be.

Parts fail and there's lots of info out there about how to fix them... including the part numbers of the electrical components ;)

Well hell, a quick trip to Radio Shack and I've got a second set of drum sensors. I've got wiring diagrams off the net. We've got every tool you can imagine here and loads of space to build things... so yeah, I started tearing into the kit. At first I just figured I'd add some cymbals (it has none). As I got used to how it all works, I decided that I could probably wire the Rock Band kit into my real kit. It took some time and effort, but... hahahahahah... yup.

The Rock Band kit is fun and it works, but playing a real kit is over the top happy! 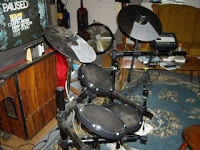 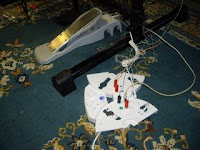 So now I can play either real drums or Rock Band drums... or both at the same time :)
My drumming's gotten loads better too.
Good times.
Jim
Posted by Jim at 4:17 AM 1 comment: