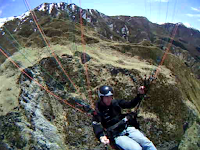 I'll have to dig out some pics... I shot a few on the way, I'm just feeling lazy at the moment.

So I took a bus down to Dunedin (town, 4 hours away) to visit some friends. The bus was pretty empty, and well, I don't have to drive, so I took a snooze in the back (long seat). I woke up in a town called Roxboro. We were stopping to gas up.

Here's where it gets neat.
Roxboro sounded very familiar, but I was sure I'd never been their before. Then it dawns on me... it was a waypoint on one of my cross country flights for my pilot license. Ok, big woop right? Well yeah, but then I noticed a huge contrast.

See, before, driving down to Dunedin (I've gone a bunch of times) was like heading out into the great unknown. Sorta like driving in the desert in a way, though much more beautiful. You sorta have this detached, out in the middle of nowhere feeling cuz you're in unfamiliar land. You know the road is going to end... eventually... somewhere.

Well that was gone.
In a big way.
I'd flown over where I was and where I was going. I had a really good picture in my head of the whole shooting match. I was no longer adrift on an ocean of strange, I was plodding around in my back yard.

Ah, back in Queenstown :)
I'm going to post up some of the stuff I've been using facebook for lately.
It dawns on me that I can't find it quickly later if it's there and there's just some stuff I want up that doesn't fit in facebook well.

Woo Hoo
This year was super easy.
A friend of mine, Jose, contacted me on facebook cuz he heard I'd be looking for a place and he needed flatmates for the summer. He's located in the perfect part of town in a very nice place. Bingo.

So this year, I just landed at the airport... Jose picked me up and we drove into town (how cool is that!... usually, I'm struggling to get to town), I drop my stuff off and catch up with Ian who's heading up the hill for a fly... OK. We have amazing flights, it's an uncommonly good day to fly, and then head over to the climbing wall to drop in on Nial and Shane on our way to the hot tubs at Aqualand.