Oh the mighty power of a smile.
I was reminded of this today. If you want to change your outlook and the world you interact with, just smile. It's crazy powerful.

So I was in Fresh Choice (local supermarket), standing in line picking up a little stuff for dinner. Now normally, I'll chat a little with the checkout people. I figure, they're bored as hell and generally seem to welcome a break from the monotony. Mostly I try to get them to talk about their day... good, bad, otherwise. People just feel better when they get the chance to tell someone about silly things like that.

I wasn't feeling like talking though (loooong day) and I only had two things (not much time for chit chat there), but... hrm... what to do. So I just smiled. Bigger than your average polite smile... not huge, but definitely a bit on the goofy smile side. Man what a difference. The check out lady dropped out of highway hypnosis for a bit and lit right up... started to smile. Bingo :)

As I walked back to my car, I noticed (again) how good it felt to brighten up someone's day. But that wasn't it... It was that all it took was a smile.
Posted by Jim at 12:53 AM 1 comment:

Still working on it

Still gotta get around to posting those pics. Sorry.
Been busy. Not busy flying, busy with other stuff... "normal" type stuff.

Finally got over to see Ian today!
There are just few nicer people in the world. I'm so happy I finally got a chance to pop over there. Even went to the gym with him and Rob (works for Ian). Yup... imagine me with a bunch of muscle-heads weight training. Think of hanging out with Terry Schutts... eventually you start weight training without even realizing it ;) I'll sleep good tonight.

Busy with other stuff ;)

Sorry.. been busy doing stuff.
Got a bunch of pics, should have time to put them up today (looks potentially windy).
Might have to go visit Ian first.
Jim
Posted by Jim at 11:33 AM No comments:

Came across that when reading some news about him crushing Hillary in Wisconsin (go cheese heads!)
I think it'll be a sad day if Hillary gets the nomination due to superdelegates. I also think there will be rioting in the streets if the supers go against the votes on this.

I'm getting nervous because I always seem to like the one that loses. The outcome will be determined by the superdelegates no matter what (neither can win without them), so the chances of "politics as usual" is pretty high I think.

This grabbed my attention
I wouldn't expect behavior like that in any competition... much less from polatitions.
So I did some research.
The more I read, the more I liked the guy.
This wasn't an isolated incident that looked like character. This is how the guy is.

It's been a long time since we've had an inspirational leader. Longer than I've been around anyway.
Have a look.

Some people got together and turned it into this

I look forward to him crushing McCain.
Posted by Jim at 7:12 PM No comments:

Yesterday I was feeling much better. Just in time too as we had a very busy day. We've not had much work lately, so it was nice to have a full on busy day. In fact, the whole time I was sick, I didn't need to fly anyway. I was quite happy to be recovered enough to fly. Well, almost recovered enough, as it would turn out.

I noticed as the day went on, I was losing my voice. Just the same as if I were shouting a lot, but I wasn't shouting. In fact I started talking less and less. Now, my job requires a good amount of talking. But I was limiting things. By the end of the day I sounded like the godfather.

Today I don't sound like anything. I can't talk. I feel fine otherwise, I just can't talk. Well, I can in a sort of "old man in the hospital gasping for air" sort of way. My flatmate's flying the one customer I had on today. Weather's going to hell and the schedule's light, so no worries there. It'll be nice when all this is over though.

I'm horribly up on current events at the moment.
I've been living on my couch for the last day or so fighting a headcold. So I've had way too much time to read the news... all of it. Uhg. I'm feeling quite a bit better now, so hopefully tomorrow I can escape this wonderful little prison. 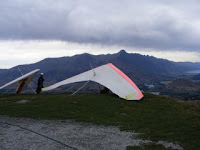 A friend of mine lent me an old "piece of junk" glider to fly. It's old as dirt (in hang gliding terms) and a "stiff horry beast"... "If you crash it, you'll be doing me a favor... I can use the extra space in my garage". I was starting to get the feeling that he didn't like it (or maybe me?).

So yeah, I just had to try it ;)
Let's see how bad this old hunk of junk really is!
I've got this strange fascination with old gliders. Some truly are obnoxious pieces of junk. It's interesting though to see just how far modern gliders have come and to see where certain things came from.

I've been flying an old Moyes Mars lately. It's an old trainer glider and it is a bit stiff. But it's exceptionally light weight and easy to setup. I love it for that.
The other glider in the picture (on the left) is an Airborne Shark. It truly is a stiff beast. It's a fairly modern moderate preformance glider. My flatmate and fellow maniac Gerardo (pronounced Herardo) was flying it.

He'd flown the Apco the other day and deemed it "not so bad".
Unlike the Mars, the Apco takes FOREVER to setup (uhg!), but whatever. It was a cold grey day with no flying, so why not?

So we drove up Coronet.
The wind was blowing down the mountain (not flyable) but would "come up" just enough to tease us into thinking that we "might get off the hill" (fly). It's kinda like waiting for a wave when surfing... you get ready so when it comes, you just go.

So we setup.
Now the worst thing in the world to a hang glider pilot is to "pack up on launch"... to get ready to fly and then not be able to and have to pack the glider back up and drive down the hill.

While we were setting up (takes a while), waves up "good cycles" were coming up the hill... we were getting optomistic... "this might actually work".

Oh yeah, you know where this is going.
After we get our snow suits on "I gotta pee"... yup, the wind starts blowing pretty definitively down the mountain. CRAP! (no more up cycles).

No... we're waiting!
Neither of us showed any signs of wanting to pack it in. We could see each other checking to see if the other wanted to give up... nope. We were both hating waiting and getting less optomistic by the minute (esp with the wind getting worse) but NO... just a little longer.

Eventually, Gera gets out of his harness and starts walking around. If he was throwing in the towel, he'd start taking apart his glider... this was just frustration.

After a bit though, we started to very begrudgingly give up. Lots of explatives followed.
Then... yup... the wind died.
Down is bad.
Up is what you want.
But nothing is ok too... you just have to run like hell.
We don't do "no winders" with tandems cuz we have to be ready for them to not run so well, but solo we'll even do a (very little) bit of "downwind".

As I start to charge down the hill (it's a full on sprint in no wind) I hear Gera saying something... "uh, whatever". After I'm in the air, I look back. I thought he was saying something about liking the left launch better (I used the right) and sure enough there's Gera lifting off on the left.

It's fun to kayak in the rapids from time to time. Tandem flying is the easy stuff... like going out in the family stationwagon... it's nice to take the Ferrai out every now and then.

Oh, and the Apco?
Yeah, pretty nice actually. Takes forever to setup, but flies quite well.
Jim
Posted by Jim at 12:59 PM 1 comment: 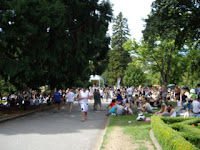 So I head down to the Salvation Army today... What? Closed?
I'm not really sure, but I'm reasonably confident that it's a weekday. It could be Sunday, but I'm pretty sure it's not. So WTF? OH! Riiiight! It's Waitangi Day! (national holliday)
nzhistory.net.nz/politics/waitangiday-introduction

Well that would explain the Circus being in town. We can't land at the High School cuz that's where the big tent is... we have to use the Rugby field.

And... the Reggae Festival down at the Queenstown Gardens.
Big to-do with lots of music and people. So I wandered down to check it out of course. It's going on all day. I think it ends around 10pm cuz it gets dark then. I had some hours to kill. Something struck me as odd (aside from the distinct lack of rednecks), no cops. Big festival, whole town (it's in town)... no cops. None. No need.

I'd be surprised if they don't bring a couple in after dinner time, but you never know. And yeah... this is a serious gun control country... the cops won't even have them. 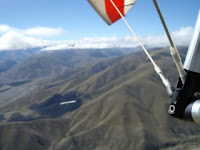 Been off flying in the middle of nowhere.. a place called Omarama :)
(one of my favorite places on the planet to fly).
I'll put up more later.