Walking down stairs is, and has always been, one of the most difficult tasks with this.
Your knee has to bend a lot and you use the muscles that have been decimated by surgery.

So I am extremely happy that I can go down stairs with ease these days.

And
The popping/cracking in my knee has migrated. This is apparently normal, and makes sense, as things reorganise. The swelling's going down and things are shifting around. Scar tissues tearing away and generally there's a lot going on in there.

The popping that used to happen when I straightened my leg came and went a long time ago. One day, I had it pop when I was sitting with my leg straight and shifted my weight a bit... that was weird.

These days it's when I'm walking down stairs.
It's great when it goes.
Before it lets go, I can feel a little resistance under my kneecap... sorta like an air bubble.. and my knee doesn't flex totally right. Once it pops, my knee moves normally. I've taken to walking up and down the tallest stairs in town like it's a treadmill ;)

It just rings true... it reinforces how good going to the gym has been for me and helps stir me up and keep me feeling good about going. A while back there, I was concerned that I'd hit the dreaded "Plateau" once I recovered from the major traumas of surgery. Knock on wood.. cuz this hasn't been the case. If anything, I've gone the other way. I love going to the gym. I get perked up when I realize that "HEY... today's a gym day!".

You're supposed to take a rest day between workouts. Since I'm not keen to devote every single day to the gym (it's across town), I don't do the typical "split" routine. I just do everything on one day and rest the next. I often wind up at the gym anyway, but I just go for the pool on "off" days.

So I'm 11 weeks post operation today :)
WOOO HOOO!
Working hard at the gym is definitely paying off! There's work ahead still, and there always will be, but it nice to smell the roses from time to time.

We had a guy stay at the house last night who's had three ACL surgeries. He echo'd what I've read and heard so many times... rehab (getting to the gym) is so vitally important. He said that the worst thing for him was the loss he always felt in the power of his hamstring. There are three different styles of surgeries, one is hamstring. He said that when he went through that one, he didn't focus on rehabbing it and has never felt the same. It felt so good to know how hard I've worked on mine and know that mine's come along so far.

I also run into people that aren't expecting me to be doing as well as I am now. Some of it is of course because some haven't seen me in a while, so their image of me is still from back then. Some however have, and some are medical professionals who know what shape I should be in. It's good knowing my "program", as I call it, is going well.

Fun at the beach 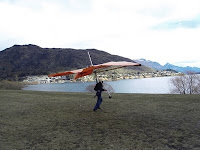 Been having fun as of late teaching friends to fly at "the beach".

This is a little flying spot we have at a park on the lake.
When the wind is from the West at the right speed, it's a fun place to train.
When it's a bit stronger, it's one of my favourite places to fly :)

Handily, it's right next to the airport. A bunch of my friends from the aeroclub are keen to learn to fly, so this works well. The wind doesn't come right in the Winter, but it does sometimes in the Fall. At the moment, we're in one of the right weather patterns for it. So it's happy times at the beach.

I had to take a day off from the gym to battle a headcold :(
Two actually, but I only workout every other day. You're not supposed to work out every day, so half the time I'm just in the pool.

I felt better today so I was able to go back... just for a "light" workout... just to "get back to it". Riiiiight. Damn it was good to be back.

Physio tomorrow.
I only go every other week now.