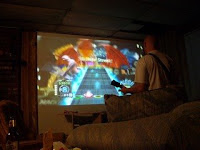 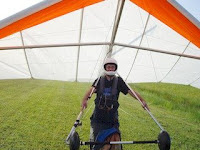 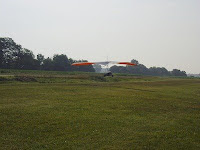 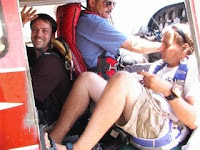 Oh yeah, He jumped out of a plane too 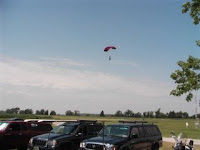 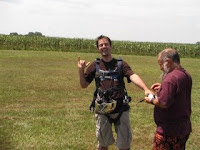 Summer in general is busy for me, with June in particular being especially insane.
It kicks off with our annual competition and rolls right along into our annual "fly-in". Of course everyone wants to fly in the summer, so we're always busy as can be. Good times.

It's raining at the moment, so I figured I'd take a sec to catch up on my blog here.

I'll have to dig out the pictures, but John came down recently and I was able to set him free... he now flies solo. :) Yeah kids, you now have two crazy hang gliding brothers.

He also joined in on the latest craze around here... Rock Band. We've had Guitar Hero for a while now, which keeps the guitar fans happy, but there's been nothing for us drum nuts... till now :)

As an added bonus, the singing (yes, it has vocals) is rather impressive. I expected just some Kariokie type setup, but they actually make it work. It registers pitch and has the vocal track backing you so it doesn't have that Kariokie sound, but it does have the Kariokie fun.

It's great being able to have four people play a video game together. Much like Wii Sports where you can have a four player tennis match. It makes for much party fun. The 8 foot projector screen doesn't hurt either (no bumping elbows).

I'm naturally obsessed with the drums. The "tutorial" stuff kinda blows, but the "practice mode" is nothing short of stellar. I'm so hooked that I've ordered a second Wii and drum kit. (I love Wii sports too) In October, Guitar Hero will release a band version too. I'm very excited about this since the drum kit is especially good.