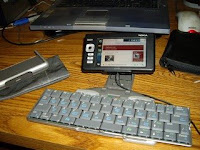 I've been eyeing an Ipod Touch recently and they're cool as hell, but unfortunately one thing just kills it... no Skype. No Flash either. That's a one two punch in my book. Oh well. It was a fun idea. Then I remember my old solace for not having an Ipod was that I already had a Nokia 770. My little eeepc had long since filled it's shoes. But hey, let's see what kinda hacks people have come up with for the 770!

So... can it be made to run Skype and Flash? The new model, the n800 can. Well it seems that what prevents the 770 from doing so is licensing, not hardware. The 770s the slow cousin, but it might have enough juice. And hell, it'll be fun trying either way.

Well the hackers out there have found a way to make the 770 think it's a 800 and trick it into running the 800s operating system. Getting the software to run was also a bit of a trick, but he he he... I've got Skype running :)